I’m just back from a long week (if such a thing exists) in Athens. It’s certainly a bustling city, and one that never seems to stop completely. Cafe’s especially were populated at any hour that I was ever likely to be about and people think nothing of dropping into a restaurant at midnight.

Having booked through lastminute.com it was all fairly cheap and I was interested to see what a five star hotel was actually like. The answer was: it was okay. It’s actually made me think that perhaps there was some kind of “self-certification” going on, or else star ratings are just something I don’t understand. The room was nice and big anyway and had an interesting view of a pleasantly dodgy area of Athens known as Omonia Square. Much fun could be have just watching the comings and goings of various misfits.

Anyway… onto the photos.

The view from the hotel room balcony. Traffic in Athens would certainly give London a run for its money. What it may lack in volume it more than makes up for in chaos. I was surprised to see how many large motorbikes there were around too as some of the twisting streets didn’t seem particularly conducive to a 1300cc Hayabusa. Athenians also have a laissez-faire attitude to motorcycle helmet wearing and it’s not unusual to see someone bombing along the road with either no helmet or, even more strangely, one hooked over their arm instead of on their head. 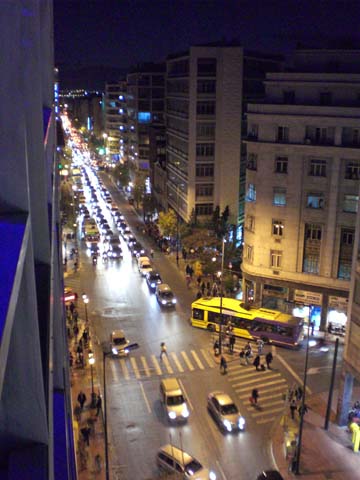 The view south from Lysicrates Hill (the highest point in Athens, from what I could tell) shows just how far the concrete jungle extends. Buildings are rarely very high rise, although often still 7 or 8 storeys, but they extend in all directions. Around a quarter of the population of Greece apparently lives in Athens, which explains the traffic somewhat: 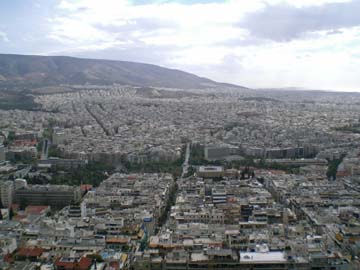 At odd locations around the city there are rocky outcrops such as this one: 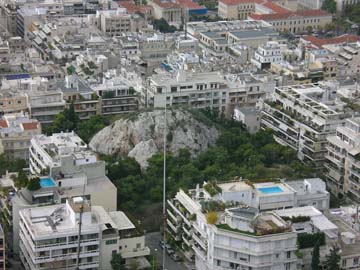 Athens is in a basin formed by three mountain ranges which makes for some good views, especially as the sun goes down:

Then, amongst the urban mayhem, the centre of Athens is a green oasis of plants and ruined temples, such as the Hierocles Temple inside the Agora below: 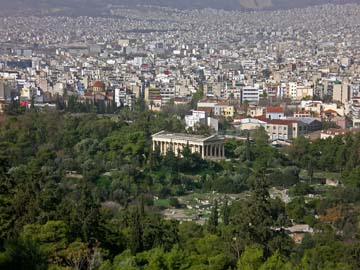 Lysicrates Hill, the place with the best views, is one of the islands of green as enforced by its steep sides. There’s a small white temple at the top and one of many varieties of street sellers. This one will take your photo for you for some unknown fee. (I didn’t have the heart to tell him that digital photography is going to be making his little polaroid camera somewhat obselete.) 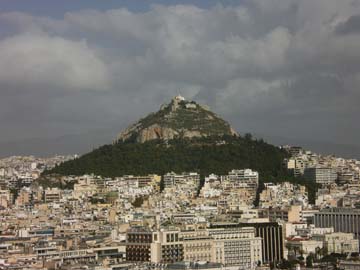 Lysicrates Hill in the midst of the concrete of Athens: 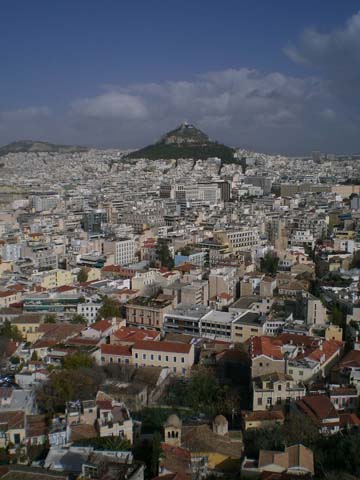 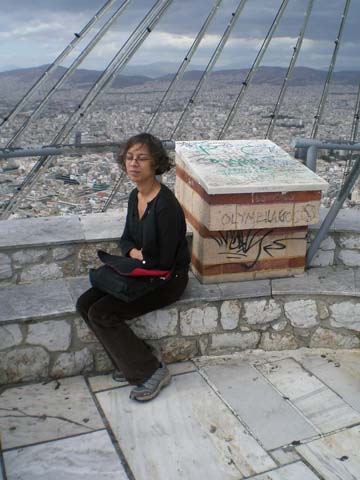 Although almost everyone in Athens seemed to speak excellent English the different alphabet can make things interesting at times. Looking at the street signs I constantly had the feeling that I was inside a Playstation game: 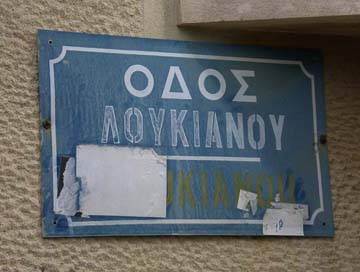 Greece is, of course, the birthplace of democracy and political thinking is obviously still at the cutting edge: 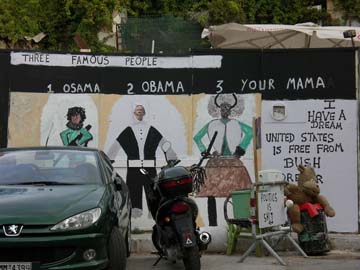 Leading away from the Acropolis some of the axial streets cut a very impressive swathe along the city: 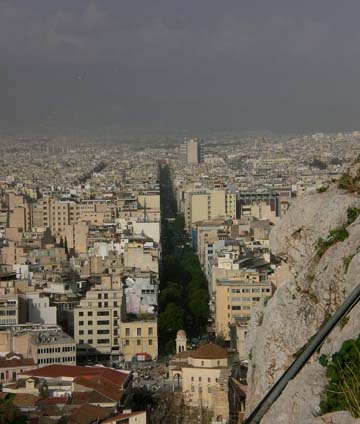 Athens is also home to a large number of stray dogs (apparently in the thousands) although none of them cause any trouble at all. It’s almost as if they’ve been abandoned by individual owners and instead have been adopted by the community. In fact, most of them were quite healthy looking as well as being quite receptive to a stroke on the head. Cats were also in abundance, although not to the same degree, and seemed to have a very amicable relationship with the canine strays: 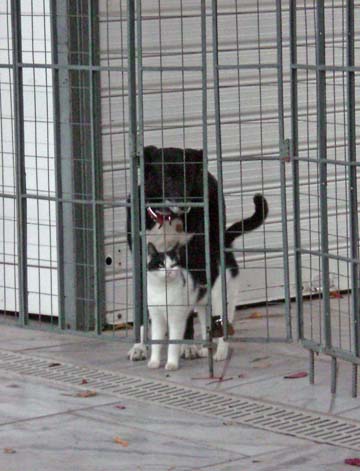 And of course, there’s the ever-present views of the Acropolis. Well, not quite ever-present, but views do appear at all kinds of odd moments as you walk around the centre of the city. This view from Lysicrates Hill is one of the best aerial shots you can get of the Parthenon on its rocky outcrop and has the port of Piraeus and the sea beyond: 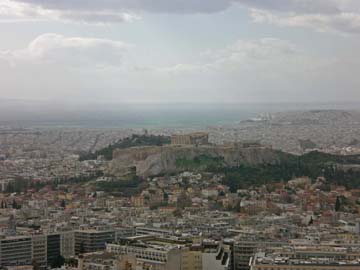