I should have noticed it before: 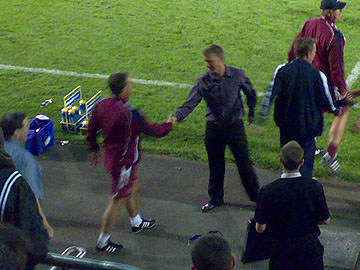 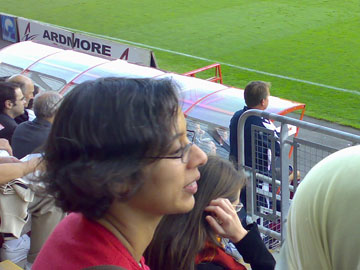 One of Leyton Orient’s best players, Matthew Lockwood, is to join Nottingham Forest. This is quite a big deal for the O’s and Lockwood was one of the best players over the past two seasons. It’s not entirely a surprise and I can only assume that Orient were paid a good price for him.

No-one can really blame Lockwood for making the move – it’s a good chance to serve out a couple of seasons with a club that may well be back in the Championship at the end of the season.

Lockwood – It Was The Most Difficult Decision Of My Life

The Shepherd Epstein Hunter (SEH) Architects Fantasy Football league for 2006 to 2007 finished as below. We didn’t quite make it to 1st place in the end, finishing second (which I blame almost entirely on Ashley Cole). Still, given the distance we were behind in 4th place at Christmas I can’t complain that much, and I think this year we finished higher up in the national leaderboard than ever before (although I don’t think they give out prizes for coming 57972nd). Next year it’s going to be important to get a good start, though, given how close it seems to be at the end.

Well done to Keneche for winning, but we want our trophy back next year.

Goalkeeper Glyn Garner, defender Adam Tann, midfielders Craig Easton and Luke Guttridge, and striker Gary Alexander were given the chance to extend their spells at Brisbane Road, but they have opted to seek fresh challenges and will join John Mackie, Shane Tudor, Justin Miller, Donny Barnard, Derek Duncan and Phil Mulryne in leaving the club this summer.

I’m hardly going to recognise anyone next season! Well, at least Adam Chambers is still there, although it’s hard to see how he can win every game by himself.

In anticipation of various possible outcomes in the Champions League final tonight between Liverpool and AC Milan, I thought I’d make some possible headline predictions dependant on the on-pitch action:

Liverpool win 3-1 after a Kaka own goal.

Liverpool are robbed as Crouch’s goal obvious crossed the line but was missed by the officials.

Something bizarre happens to do with Liverpool’s keeper and lots of other players.

Zenden scores the winner following a one-two with any other player.

Liverpool Riise to the challenge

You can probably guess.

Benitez is brought on as a subsitute in the 120th minute and scores the winning penalty.

Life’s a lottery, football’s a Rafael

Jermaine Pennant’s clearance is deflected into his own goal and the player decides to retire and join a monastery.

Benetiz is coincidentally wearing his favourite jumper as Dudek (the substitute keeper) miraculously saves all of Milan’s penalties.

Just some of the many headlines we may be seeing tomorrow.

The Telegraph Fantasy Football password for Wednesday 9th May, which is the last weekend of the Premiership is SPEAKER.

Good progress for me this week with 39 points taking me to within 13 points of the Superleague leader. It’s going to be a close finish.

The Telegraph Fantasy Football password for Wednesday 2nd May is DESK. With only two weeks of Premiership left: good luck. 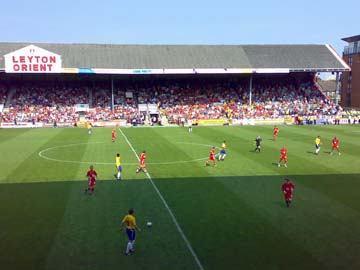 It’s not often Leyton Orient get to play former European champions, so it’s no surprise that the last home game of the season was going to be a sell-out.

Orient went into the game needing to win, or for Bradford to lose, to guarantee a place in League One next season. Forest needed a win, and for Bristol City to lose, to have a chance at an automatic promotion place, otherwise they’d be down to the play-offs.

As it turned out, it was a result that suited everyone (except Bradford). Chesterfield beat Bradford which relegated them both, Millwall beat Bristol, and Forest beat Orient. So we’re not going to be relegated and Notts Forest have their automatic promotion hopes alive.

The 1-3 result was certainly a fair one and although we had our hopes up after Matt Lockwood (certainly Orient’s player of the year to my mind) scored with a fantastic left foot to take the home team into lead, we didn’t ever feel like we were going to come out on top. The visitors were the stronger throughout and it could have been maybe 6-1 in the end, although if I were a Forest fan I wouldn’t be feeling too confident in my team either getting back into the Championship or staying there; they weren’t that good.

Anyway, no more Saturday afternoon matches for me until September, with another campaign to stave off relegation to look forward to. 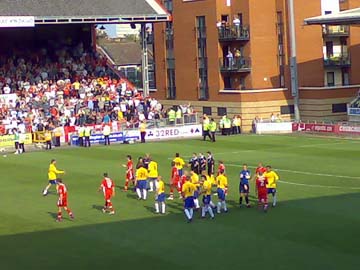