The Tour de France came through Leyton earlier today. I had a very productive afternoon watching it on the telly before deciding I’d better go and grab a spot to watch it go past in the flesh. Orient Way was empty enough to get some photos and provide a nice long view of the peloton, although at the speed they go through it was all over in a few seconds anyway. Still, I can say: I was there! And I have photos to prove it. 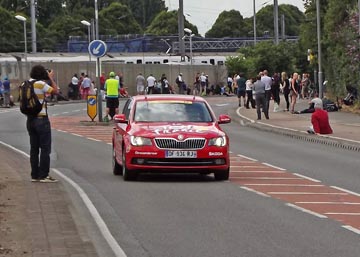 Before the cyclists came through there were dribs and drabs of cars. This one at least has the logo on the front, but note the French determination to persist with speaking their own language also carries over to driving on the wrong side of the road even when we know they could keep to the left if they really wanted to.

You can’t get much more French than a Carrefour car on the wrong side of the road:

Although a quirky little van with the Tour de France logo on the front comes a close second.: 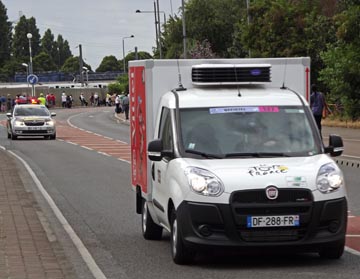 I’ve always thought of French as having too many language constructs getting in the way of saying what you really mean. This gets around it by only having the important words on the bonnet and no niceties of language at all. There can be no doubt what “FranceTVSport” does”: 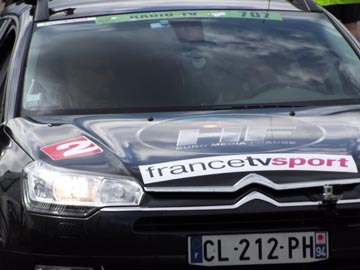 This is the last of the car shots honest… It’s the neutral service vehical, driving well in front of all the cyclists because… well, I don’t know why. In case one of them teleports down the road and then breaks down, I guess: 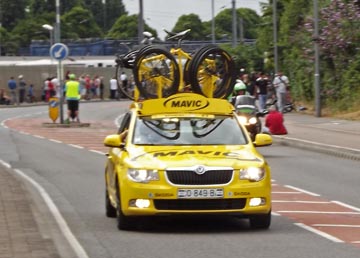 Not only are they sending cars with their supermarket logos on over here, there were a few gendarmes that snuck in with the rest of the vehicles: 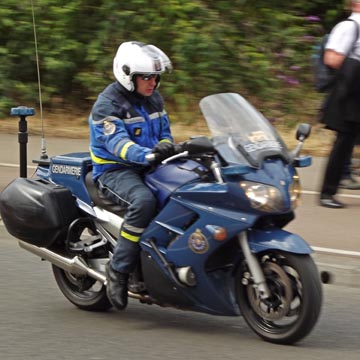 As the TV helicopter came into sight I knew the peloton must be getting near and things started to get exciting: 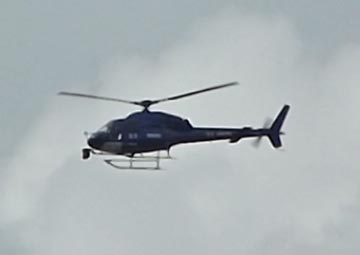 The breakaway of Jean-Marc Bideau and Jan Barta comes around the corner. I hadn’t seen the race pictures for half an hour and my phone had given up on having a data connection so I was surprised they were still in front: 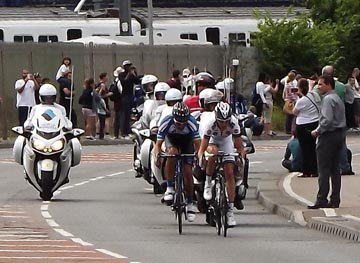 Another shot of the two valiant breakaway riders. They were soon doomed to be swept up by the chasing bunch, but they lasted longer than I would have expected just two riders to have managed: 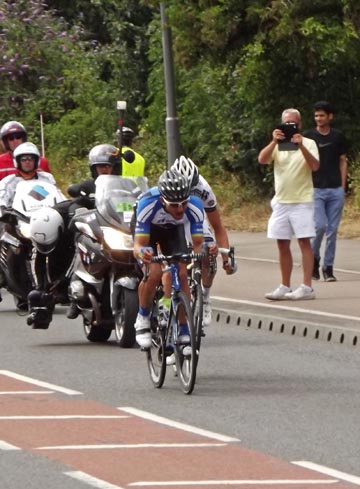 Shortly afterwards the main peloton came tearing around the corner surrounded by motorbikes: 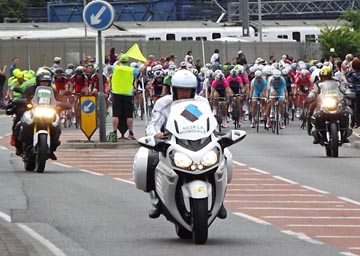 The main peloton came tearing past with the whirring of mechanical parts and only a few organising shouts, and within a few seconds they were down the road and out of sight again. It’s a shame it was too early to see the sprint lead-out trains forming but there was a tricky turn up ahead so they were still in a racing frame of mind: 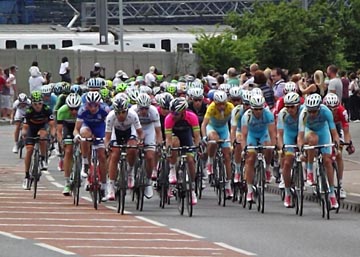 And with that the Tour de France had been and gone, and I rode home and went back to the telly to see the conclusion on the Mall.

I was on the telly! If only just. Standing on an isolated stretch on the wrong side of the road had the advantage of making me easy to spot. I’m the one in the yellow t-shirt on the right: 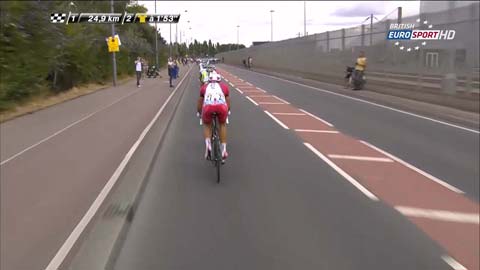