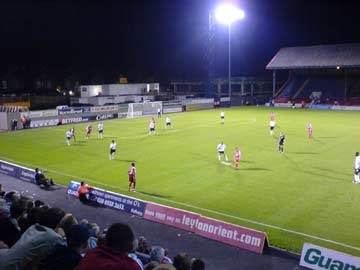 Orient played particularly well for three quarters of the match last night but some seriously dodgy decisions knocked any real chance we had of even drawing against a side two leagues higher on the head. Luton missed a couple of chances early on, although not before Leyton had a goal disallowed for (I guess) offside, and despite the obvious pace of Luton on the break we were keeping good posession, passing the ball around well and more than holding our own. When the first two of their one-on-one chances went wide it was almost looking like we might be lucky, but all that changed when the first goal for Luton followed what looked to be an obvious handball. This was just inside injury time at the end of the first half and came from a free kick which was another dubious ruling.

The O’s kept their heads up and carried on playing a close passing game and although there weren’t many chances Efe had a serious run on goal stopped by an appalling refereeing decision. The officials were swallowing every line the Luton players fed them, and that continued for the rest of the match. The first nail in the coffin came from a bad goal kick which went straight to the big (and fast) Luton strikers, and the final nail was an own goal by Alexander (harshly, the striker’s first of the season). There was a consolation goal for Orient towards the end but once it went to 2-0 the heart had gone from the team and Luton grew in confidence and started to look like the side two divisions higher.

Orient didn’t really do enough to win the game, but they played well and certainly made it hard for Luton to get off the ground. The one-touch control of the Luton players, plus the pace and strength (especially versus the Leyton Midgets) just tipped the balance, but I think the O’s really did enough for a draw last night and, it may be a footballing cliche, but in the end ‘it woz the referee wot won it’.