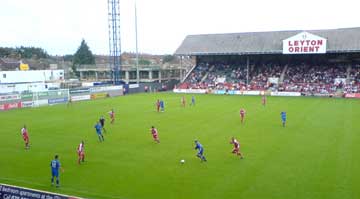 It was a good start to the season with 3 wins out of 3, but now reality has hit and we’re only on 3 wins out of 4 having lost 4-1 to Rochdale. 9 points from 4 games still isn’t bad at this level where the whole league is more-or-less on the same level. The disappointing thing from this match, though, is that the O’s played pretty well and certainly didn’t deserve the goal difference. Rochdale, however, were just much more incisive when it came to goal action, a lot of this coming from the size and strength of most of their team. Man for man they had a good two inches on every Orient player. Steele played solidly, but Tudor’s runs from midfield and Mackie’s defensive duties were definitely high points in the side.

So some disappointment that the dream run didn’t continue, but there’s encouragement to be had from the way the team played and I’m sure most Orient fans would have settled for 2nd after 4 games had they been asked at the start of the season.

There is some consolation from the weekend,though, in that Spurs are now top of the Premiership! (If only on goal difference…)