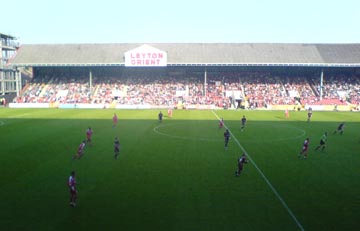 The O’s have had a particularly succesful run lately and were sitting just off the top of the table going into the game, with a win giving them every chance of sitting top going out of the weekend.

Orient started well, and dominated the first half. They were rewarded with a goal from Gary Alexander who’s now on for seven scoring games on the trot (after the early season drought). Other highlights included a corker of a shot from Lockwood that grazed the outside of the post. The team were passing well and making the defence work, and were also putting some good moves together. The most impressive thing, when compared to earlier in the season, was that more of the players seemed willing to have a go at the defence; that seems to me to be the only way we can keep winning games consistently and do something about an abysmal goal difference considering how highly Orient are in the table.

Still, at the end of the first half it was only 1-0 with the usual collection of could/should have beens.

The second half was completely different when, from around 10 minutes in, Lincoln dominated play and made a number of chances. The goal was almost inevitable, especially coming after Miller’s goal-line clearance that, to everyone on the pitch except the officials, should really have been the first goal to Lincoln. Leyton appeared more and more disorganised and balls kept flashing across the Orient goal. Lincoln, as with most teams, were on average taller than Leyton’s players (although, to balance it out, Lincoln did have two players that made Shane Tudor look like a giant) which made the home fans nervous every time a corner was won.

In the end a draw seems a fair result. 2-2 would have better reflected the action in the game but a point is better than nothing.