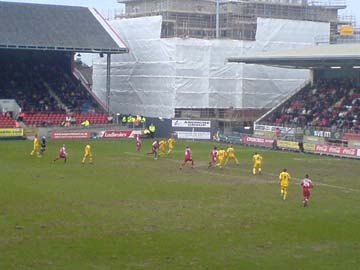 Leyton Orient ground out a 1-0 win against Cheltenham playing some football that was a long way from some of the flowing, controlled style that has been a feature of their game this season. We’ll take points anyway they come, especially at this end of the season, and the win takes Orient up one place to fourth in League Two.

Glyn Garner can take a lot of credit for keeping the O’s in the game at all, let alone ahead, and the Cheltenham supporters really will be going home saying ‘we woz robbed’, and justifiably so. They had the better chances, and the better build-up play too. Orient weren’t abysmal by any means and did create a few chances but it’s an interesting time for the club with a few players vieing for first team choice, plus injuries and suspensions (Shane Tudor and John Mackie respectively) giving some of the younger players a chance to show what they can do. In this case, young Demetriou showed some good skills and effort, if not enough to keep Tudor out, and Tann certainly played well in central defence.

More surprising was the quiet game from Craig Easton who had been missed recently. Also interesting was the starting pair-up of Ibehre and Connor up-front, with Gary Alexander only being brough on as a substitute. Conner showed what a good player he is again and although the pairing himself and Jabbo appeared to be working quite well, Alexander instantly made a good showing for himself when he was brought on and I wouldn’t be surprised to see him starting by right next match.

In the end, it was a scrabbled goal that gave us the three points. Despite the fairly good points haul lately, there are some worrying signs that we’re riding our luck slightly and somehow still not scoring enough which is going to be a problem if it comes down to goal difference. Still, there are some very interesting home matches coming up that are likely to prove the deciders for the automatic promotion places. There are a few must win games coming up so we can’t complain at getting the points that weren’t really deserved.