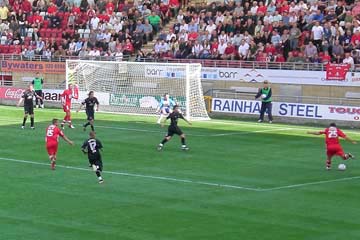 Leyton Orient played Brentford at home yesterday hoping to pick up some much needed points to pull themselves close to the middle of the table. It was a highly entertaining game and Orient played very well throughout, all bar a few wobbles from the defence which eventually let in the goal which resulted in the points being shared.

The movement throughout the team was very good and it was some creative passing and running which lead to Michael Simpson’s well-taken goal. New loan signing Adam Chambers was also quite impressive and I think it’s going to be a challenge to Martin Ling as to how to build his central midfield once Craig Easton is back from injury.

It’s somewhat disappointing, however, to come away with only a draw when we had so much more of the play. Ibhere somehow managed to head over an open goal from low and close range and that pretty much told the story of the game.

Still, Brentford have been having a good run and a draw would have been a good enough result from the start. But Orient are going to have to make more of the good opportunities they have to sew up these games and take three points to have a decent chance of staying up this season.

Leyton Orient vs Brentford on the BBC site