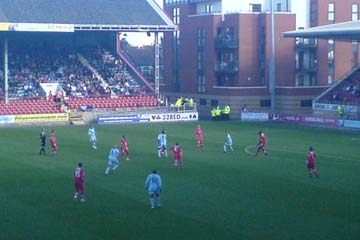 A goalless draw against Chesterfield isn’t too bad a result for Orient, considering the recent form of letting in three goals a game. A clean sheet is a good starting point as the defence seem to have been very weak this season, but yesterday did seem them winning a few headers and getting to a few more balls first.

Overall, the O’s had the best of the play, but only just. There were a few chances and although Chesterfield didn’t have as many they were probably clearer cut. It’s disappointing that last season we managed to beat this side in the FA Cup but don’t seem to be able to this year when we need to win these kinds of games to stay up.

Still, the team effort was generally exceptional and I couldn’t help thinking that if they play as well for the rest of the season they might have a chance. We’ll see.