After ten years since I last had a short taster session flying a Cessna at Wycome Airfield, I finally have the time and (just about) the money to try for a private pilot’s license from start to finish.

Stapleford Flight Centre is close to me, being about ten miles away, so I booked myself in for a trial lesson. Resisting the urge just to start the course right away, I thought a one-off trial was a sensible way to sanity-check that I still really did enjoy flying a plane. I needn’t have doubted it.

Here’s the plane I was about to wiggle the stick around in: 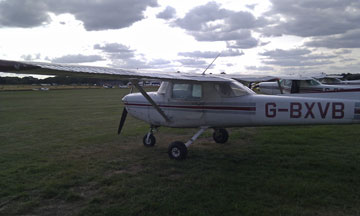 Despite the terrible photo, it was a really good day with a touch of high cloud and slight haziness, fairly light winds, but still about as good as you can realistically hope for in the UK. As the flight had been postponed by a couple of days due to really terrible weather, anything good enough to get in the air would do me.

And just to kind-of-prove I was actually in the plane at some point: 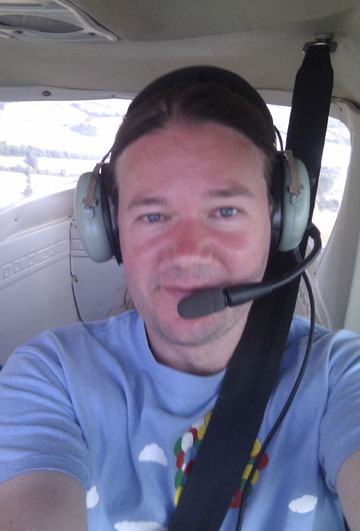 The instructure, a guy named Ollie, seemed to perk up a bit when I told him that, no, this wasn’t a present from a relative but I’d paid for myself to check that I really wanted to start the PPL properly. We took the decision that the hour-long flight would be a bit of fun, and maybe a bit of instruction, but not identical to a first lesson.

As such we did a few fun things – some sharp turns and just a bit of “getting the feel of things” – plus a “trim the plane” challenge, which was in the “okay for a first attempt” category. (The trimming was okay, but we’d gained about 350ft in altitude by the time I’d done it.) It felt surprisingly liberating to fly right over Southend Airport, which is obviously safer than flying near Southend Airport as directly above is the one place you know there are no jets buzzing around.

I was allowed to fly the approach but not the landing. I still can’t really believe that in my first lesson at Wycombe I really did get to land ten years ago; maybe a combination of lighter winds and a slightly deranged instructor.

Needless to say, I’ve booked the rest of the course. At just under seven grand it’s maybe not the most sensible purchase I’ve ever made, but what the hell. Whether I’ll make it as far as blogging every lesson as much as the excellent Forty Five Hours blog is doubtful, but I’m looking forward to the true start of my flying adventure in a week’s time. 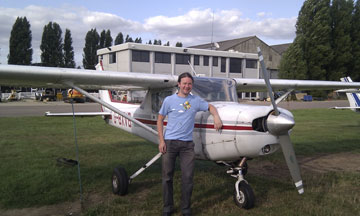