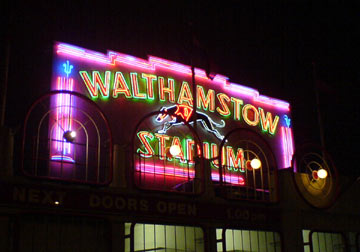 I went to Walthamstow Dog Track on Thursday evening. There are rumours it may be turned into a housing estate (as if there aren’t enough of them) so we’ve got to make some effort at keeping it going. The 6-pack deal gives you a scampi (or chicken) and chips, two £1 bets, and 2 drinks (lager, bitter or soft drink. 50p extra if you want Kronenberg instead of Carlsberg). I definitely made a net contribution to their coffers, if only by adding a few pounds. The only winning strategy in our group was to bet on dog 1 in the first race, 2 in the second, 3 in the third etc… right until back to 1 again. I won three times (out of about a dozen bets) but both times were when I had a dog to place (come first or second) when it won, so I would probably have broken even had I made the right bet. Ah well, there was only about a pound in it anyway.

The dog racing is really good fun, though, although the scampi and chips isn’t exactly the most nutritional meal money can buy. I’ll be back again in a couple of weeks time, though, to put another few pounds into the tote’s tills.