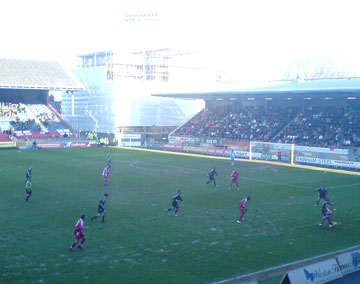 With Leyton Orient currently 5th in League Two, two places off the automatic promotion places, every game is vitally important. Darlington are pushing for a playoff place so the points are just as vital to them which doesn’t make for an easy match.

It was a high quality game with Darlington pushing hard early on but a few chances going in each direction. Despite a lot of hard work from Conner and, to a lesser extent, Alexander, it was Shane Tudor’s excellent strike from the edge of the penalty box that put the O’s 1-0 up after 13 minutes.

More chances followed from either direction including a close scrabble to get a ball out of play by Garner and a few good shots from Orient that never quite found clear space. A penalty award towards the end of the first half made it look like it could be game over, but Lockwood scuffed it and the keeper guessed the right way and made the save.

The second half was more of the same, with Orient pushing more and Darlington becoming more frustrated and seeing more yellow cards, until finally a second yellow brought on a red for Matty Appleby right at the end of full time. Our nerves were jangling as the 1-0 lead never looked enough, but the time we’d spent waiting in the cold for the final whistle was eventually rewarded by the victory and the important three points.