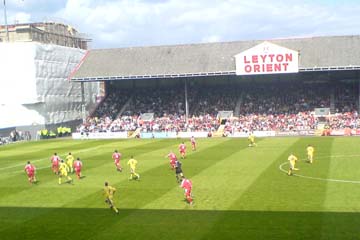 Leyton Orient kept hopes of promotion alive yesterday with a win against Peterborough and, with a favourable draw for Grimsby at Macclesfield, a step back up into third place in league two with one match to go. If Orient win their final match of the season, away at Oxford, then promotion is guaranteed. Grimsby need a win regardless.

The situation is complicated by the fact that Grimbsy play Northampton who won automatic promotion through beating Chester yesterday. However, they have the incentive that a win may take them above Carlisle and on as league champions, should Carlisle fail to win against Rochdale midweek. Orient’s final game of the season is away against Oxford United and who require a win to escape relegation.

The game was certainly intense with an early boost of a penalty, taken by Matt Lockwood who had an excellent all-round game, soon diminished by Connor’s straight red for an elbow meaning Orient had to play over an hour with just ten men. The performance was strong despite this and once the game settled down Peterborough had few chances. Finally, Wayne Corden scored an excellent second goal.

With everything been thrown at the O’s for the final fifteen minutes a goal seemed ominously close, and Glyn Garner made at least one excellent save. Peterborough, chasing a plaoff spot, broke through on the 85th minute with a well taken strike that fell, in part, from a mistake by Gabriel Zakuani who had until then had an excellent game.

The pressure kept up and Orient played some good posession football where they could
and with the final five minutes of normal time and three minutes of extra time Orient the defence held out for the win.

Match report on the BBC site