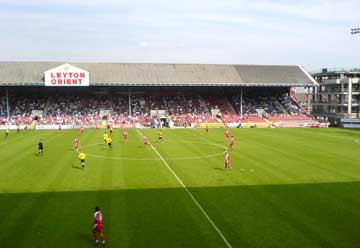 A pretty dismal performance from Orient. For a change, the midfield played worse than the strikers, with Steele playing quite well from deep and Alexander getting his first goal (at the right end of the pitch) this season.

Tudor only came on as a substitute and made some difference, and Easton had a generally good game. Other than that it was not worth watching. Efe came on as a substitute and although his pace added life to the game but his ball selection is abysmal and he passed up an excellent chance to put Alexander through by selfishly taking the shot on himself. That sort of play isn’t going to help his case for a more regular slot. At that point Orient were only trailing 2-1 and could genuinely have been right back in it.

The first Rovers goal was too good, though, from the moment the move started. Orient never produced anything like it the whole game, or the whole season that I’ve seen. The number 9 striker was good for the whole game and although both his goals were soft (a penalty and one on one with the keeper) a player like that would fit really well into Leyton’s side. If only Rovers would sell him…

As has been too common, defensive errors were responsible for the other two goals. The penalty was so obvious, and the position certainly didn’t warrant giving it away as the striker was faced with a difficult cut-back. The third goal showed our defence’s lack of pace and strength but shouldn’t have happened at any professional level.

It’s good to see Alexander get on the scoresheet at last, but Orient are really going to have to start scoring a lot more goals to have any hope of promotion this year.