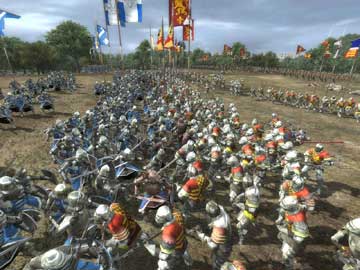 I’ve been a Total War addict ever since Shogun Total War. Medieval Total War was the first one I really played end to end, although I only played and completed one campaign (as the Italians) before Rome Total War came out. The improvements were so great that Rome Total War was just astounding. I never went back to Medieval I after that, but I’ve kept playing at Rome for the past two years and have completed campaigns under a few of the different factions.

But now Medieval Total War II is out (or Medieval II Total War, as it seems to insist on being called), and I couldn’t not buy it, could I?

The first thing is that it’s by no means the same step forward as Rome was. The interface is broadly similar, and generally the main workings of the game are the same. If you know Rome well then you’ll be able to pick up Medieval without too much trouble at all.

In fact, if you imagine mixing Rome and Medieval I together, that’s pretty much what Medieval II is. i.e. the high tech engine of Rome with the setting, and religious aspects, of the first Medieval game. There are other improvements over Rome Total War, though, especially when it comes to the in-battle graphics. It really does need some powerful hardware to look really good (which reminds me I must upgrade my graphics card). So far I’ve only played it with most of the settings on ‘low detail’ but the buildins, trees, and troops are all stunning, as the screenshot below should show. 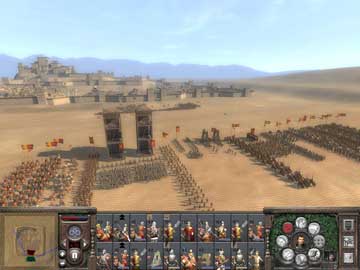 There are a few other differences too. Battles seem more realistic, and all of the figures are much more lifelike. They’ve been rendered with small differences, rather than being rows of clones, and they also fight individually too. Cavalry especially seems even more realistic than Rome’s was, and that itself was a big step up from the moving breezeblock that was a legion of cataphracts in the original Medieval game.

So you do need to think a bit more carefully about how you use some of your troops. It’s a bit more realistic, and not so much about working out what the internal rules of the game engine are.

On the strategy map level, the main addition is being able to build either castles or towns, but not both, in region. Each has different troop or trade generating buildings so you’ll need a mix, and the logistics of moving troops around can get quite involved… It does add a new level, though, although I’m really waiting for the day when regions disappear from the game altogether and you can build whatever you want wherever you want. Maybe next version.

Diplomacy also seems a lot more complex. With the addition of religion things are always a bit more complicated as attacking a neighbouring Catholic state, for instance, may not be to the Pope’s favour. However, it’s come on a long way from the original Medieval, and there are also subtle differences from Rome too. The computer seems fairly willing to make alliances, and almost as willing to break them. Also, in Rome, you had the security that if you had a three way alliance and one party broke it then the other one would side with the aggrieved. That’s not necessarily the case in Medieval II, and it may turn out that your friends friend is not your friend… If that makes sense.

The computer also seems to be cleverer about how to use its armies on the large map. If it’s ready to attack and then it sees you massing forces ready to defend, it leaves. To tempt someone into a rash attack you have to do something quite sneaky and keep your reserve troops hidden somewhere.

The map area is very much the same as Rome, although slightly extended. As the number of agent types has grown to include princesses, merchants, diplomats, spies and priests, so you find yourself roaming into different areas for different reasons. Generally, this game seems a lot harder than any of the others, and a lot more realistic for it.

Oh, and early in the game it’s worth attacking a really big castle just for the pleasure of sitting there and looking at it. (Then reload and do something sensible.) Seiges, much improved in Rome, are a step forward again here. They really do look amazing, and whats more work much more realistically. The rendered shot of a cityscape (below) should give you some idea. 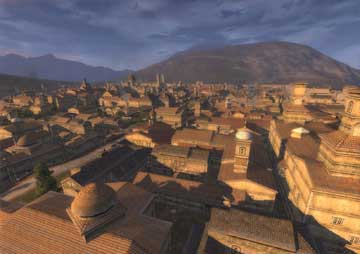 So is it a step forward enough from Rome Total War? I think so, and although a number of the reviews I’ve read don’t seem to credit it with being the improvement that it is. It’s easy to see the greater detail in rendering as just the march of time and technology making things look more impressive, but the artificial intelligence just seems to be better all round, and the subtleties of the game have really been given more depth.